This is the second of three posts showing a carving I made of an old-time clock peddler. (Part 1, Part 3) Here you will see many photos taken of the project as it evolved into a finished carving. I also show a picture of my tools and my carving bench. the project is mounted on a carving arm and held in place with a carving screw. My carving tools are designed for use with a mallet but only the very early stages required the mallet to remove larger amounts of wood. The remainder of the cuts were done by simply pushing the tools. You will also see a measuring device used to transfer dimensions from the model to the project. The first picture shows my mallet, a carving screw, two dividers, a carving arm and a plastic scale. 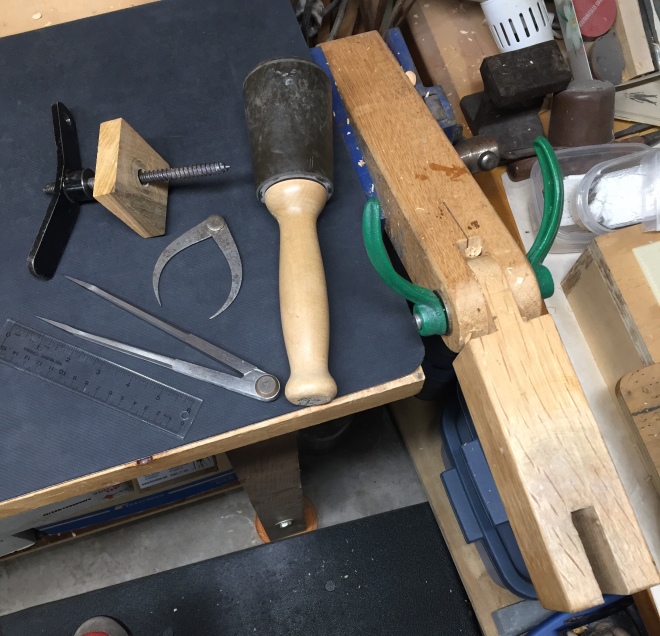 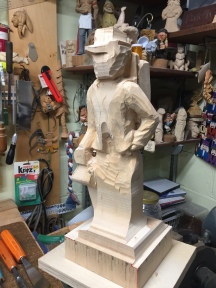 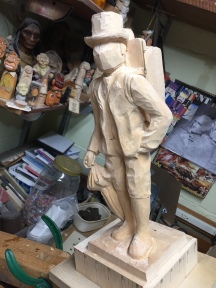 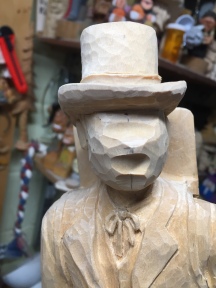 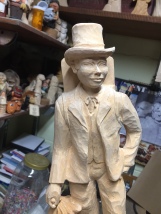 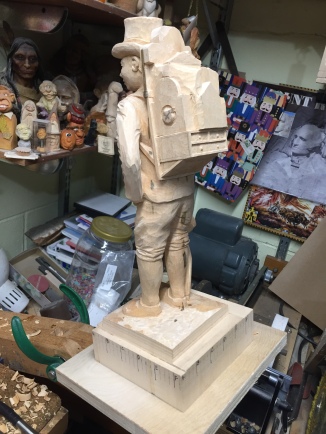 Several people have offered painting tips on Facebook so I thought I would expand the tip about a holding device. A handle can be used to hold a small carving while carving and/or painting. Some have suggested carving a handle-shaped stick or some other form for ease in holding a carving. I found some cheap tool handles that were probably meant for files or replacement screwdriver handles. Flea markets and yard sales are good for these items. I cut the heads from drywall screws and other assorted self drilling screws. I made sure each one would fit in the pre-drilled handle hole and used epoxy glue to set a screw in each handle. If the hole is larger than needed, you will have to support the screw so it remains in line with the handle until the glue sets up. That’s not a big deal but it will be a better experience using the handle if you can easily screw it into the carving.

Using different sized screws is not necessary but can be helpful if you have a small base on your carving and a large screw will cause the wood to split.

I happened to have a big chunk of pine, 3.5″ X 3.5″ X 21″ (90mm X 90mm X 533mm), that had seven holes conveniently drilled so I could use my handles. Each hole also had a pilot-hole in the bottom. This allows me to invert the handles for storage when they’re not in use.

I took a class with CCA member Tom Wolfe where painting was part of the instruction. Tom used the same concept but instead of a heavy chunk of pine, he had a short log with angled chainsaw cuts to form a rough dome shaped top so it looked like a stump. That allowed holes to be drilled at angles around the top. I don’t remember how many holes were in his base.  If I have carvings that cause my base to tip, I add a clamp at the bottom to increase the size of it’s footprint. 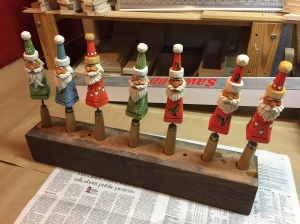 By the way, the carvings pictured were inspired by an article by Dave Stetson (CCA) in the Winter issue 2016 of Woodcarving Illustrated Magazine.

Don Mertz, a member of the Caricature Carvers of America, has a history of collaboration with the Helvie Knife company. Over the years they have produced a successful line of custom knives that suit Don’s whittlecarving style. Don’s work can be viewed at WoodBeeCarver.com. I own several of those knives but since the blade style was different from the one I use, I’ve delayed giving his a try. The other day I decided to see what I could or could not do. The pictures show the project I chose and the knives I used. They are in Don’s Signature series as numbers 2, 4 and 6. There are many more knife choices on the Helvie site. I did not succumb to the urge to grab my usual knife and a gouge or two because this was a whittlecarving challenge.

I thought a reasonable challenge would be a project offered by Dave Stetson, also a CCA member. It was in the Summer issue 2015 of Woodcarving Illustrated magazine. Dave’s advice is to make no cuts that would leave flat surfaces or sharp shadows. In other words, a soft smooth appearance. I, like Dave, would normally use gouges to achieve that look. My results were not exactly like Dave’s, but then I have trouble matching his results using the tools he recommends. I’m still reasonably happy with my result. I’m not ready to toss my straight edge knives but I know I have more options if the circumstances need the Mertz touch.

I used a block of Basswood one and a half inches square (38mm) by 3 inches long (76mm). I used Howard’s Feed n’ Wax as a finish on the raw wood.