A week ago I received a padded envelope in the mail. It contained a white block 2 inches wide, 3 1/4 inches high and 2 1/4 inches thick. This was my first encounter with potatowood. It had made the trip from Germany to Cartersville, Georgia to Verona, PA thanks to a carving friend in Georgia and a stranger in Germany. Since then I have carved the block and corresponded with Steve, a stranger no more. Steve moved from Minnesota to Germany where he carves miniatures. You can see his work at MiniSteve.com. Steve has an acquaintance that has developed a material called potatowood. I can’t report on the ingredients or the manufacturing process, but from its name, I suspect there are potatoes or at least the starch from potatoes. I’m pretty sure there’s no wood involved. One of it’s properties is it can be glued together with water. Wetting both surfaces to be joined will produce a slurry that will harden to form a bond. I tried it with some scraps and it works. I’ve been told it comes in a denser version and as you’ll see from the manufacturer’s website, it’s available in colors. See more at carving-colors.com. It’s a German site but the pictures are worth thousands of words in English.

After seeing pictures on-line of animals, I decided to give it a try. I wanted to use as much of the block as I could so I began by sketching a human character on the block. Using a knife and a few carving gouges, I made quite a pile of chips. I guess you could call them potato chips. I had no trouble cutting the material but I did find layers that resembled wood grain. Removing larger chips caused the layers to separate so I switched to smaller chips. I think the details on my project pushed the limits of a project this size. I was forced to use the tip of my knife and re-carve some details. I think it’s a good material for a carver just learning to use a knife and a few gouges. It could be the next step after carving soap. It does require sharp tools. I used my knife for most of the work and stropped it a couple of times during the process.

I’m glad I was able try this material and be somewhat on the “cutting edge” of a new product. Friends know I try materials other than wood, namely golf balls and softballs so I had to try potatowood when it was offered. I understand it’s only available in Germany for now or if you know someone who knows someone. Keep your eyes open and give it a try when it makes it to our shore.

For those who have been curious enough to read this far, I’ll give some info on the painting process I used. Before painting I chose several of the largest chips and sealed the surfaces with various products. I was concerned about the reaction of the material to water because I use acrylic paints. Remember the gluing process. I tried water based polyurethane, petroleum based polyurethane and Deft brand satin spray. I also added some untreated scraps to the test. The paint seemed to work best on the petroleum based poly. After the paint on the figure had thoroughly dried, I added a coat of liquid wax.

Here’s what you’ve been waiting for. 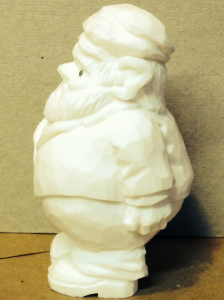 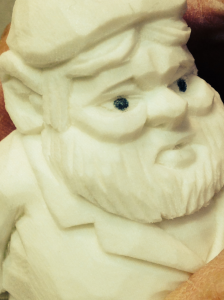